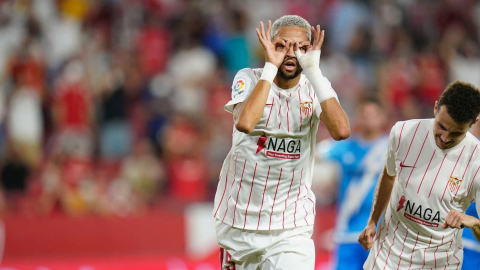 In search of a striker to succeed Pierre-Emerick Aubameyang, Arsenal leaders are multiplying the leads and seriously thinking of Youssef En-Nesyri.

Arsenal has decidedly made Youssef En-Nesyri its main target during this winter transfer window. According to information from the Daily Express, the Moroccan striker of Sevilla FC could take the place of Gabonese Pierre-Emerick Aubameyang, sidelined by Mikel Arteta for disciplinary reasons.

Indeed, Arteta aims to recruit an attacker during the month of January. If an agreement is reached with the Atlas Lion, his arrival could be delayed by a few weeks, due to his presence with the national team in Cameroon on the occasion of CAN 2021.

The Gunners would also appreciate the profiles of Englishman Everton Dominic Calver-Lewin and Serbian Fiorentina Dusan Vlahovic. But, on the financial level, the most interesting alternative remains that of the Moroccan, valued at 40 million euros.

This season, En-Nesyri has three goals to his credit, after physical problems, but the Andalusian club’s striker had already scored 24 goals last year and confirms his good performances.

In Côte d'Ivoire, the NGO African Parks is eyeing the Comoé National Park