No deaths, 22 new cases of contamination and 17 recoveries were confirmed in the Kingdom on September 19 and 20, 2022, when more than 6.79 million people received the third dose. Monitoring the pandemic, in figures.

New cases of contamination, remissions, number of screenings carried out, vaccinations, etc. To learn more about the evolution of the coronavirus in Morocco, click on this link: https://covid.le360.ma. 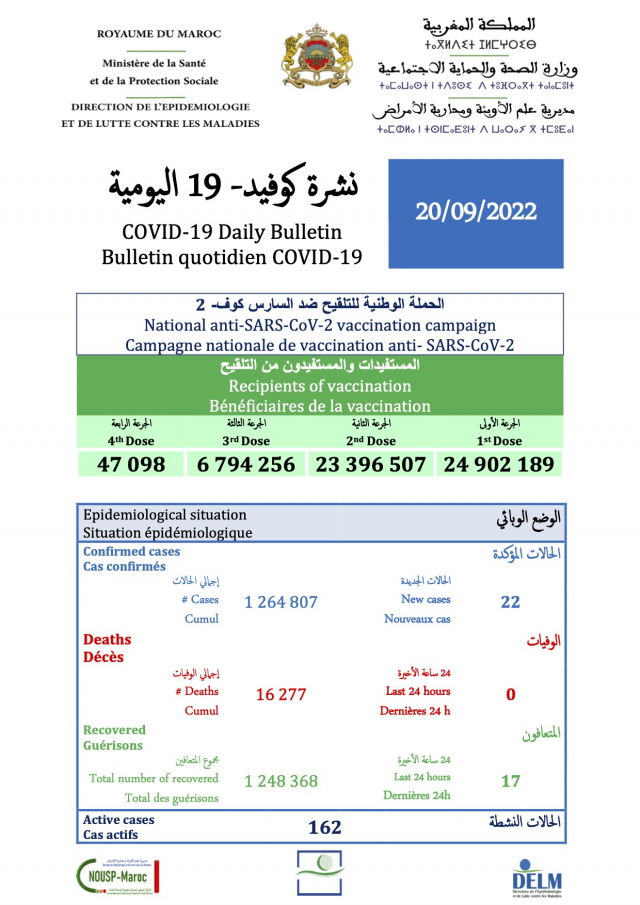 Hong Kong’s chief executive on Tuesday promised announcements about the lifting, eagerly awaited by residents and the economic sector, of the strict anti-Covid restrictions that have kept the city under glass for more than two years.

“We will soon make a decision and announce it to the public. We want to be connected with different places in the world. We would like to see an orderly reopening,” John Lee told reporters.

Measures such as a mandatory hotel quarantine – now reduced to three days – for people arriving from overseas are still in effect in Hong Kong, a special administrative region of China.

For more than two years, this health policy has dealt a blow to the territory’s economy, precipitating the brain drain to rival cities in the region.

John Lee, appointed by Beijing in July to lead the territory, made it a promise: the city will reopen its doors to the world while keeping cases of coronavirus contamination at a low level.

In early August, his government reduced the mandatory hotel quarantine from one week to three days for people arriving from abroad.

The business community and residents of the city have urged him to scrap the measure altogether, but no timetable has yet been given for a real reopening of Hong Kong.

John Lee’s statements, however, suggest that the endemic nature of the coronavirus is about to be accepted by the city.

New vaccines against Covid-19 are beginning to be authorized around the world. How do they work? Who makes them? The Covid-19 disease virus, SARS-CoV-2, has the capacity to mutate, like other viruses. It is a natural mechanism: viruses multiply and accidental genetic modifications can take place, according to the replication of their DNA.

The first vaccines were developed from the initial strain, known as Wuhan. Since then, other variants have emerged, such as Delta or Omicron. The latter in fact represents a family of variants, of which several sub-lines are currently circulating, such as BA.1.

Omicron and its sub-variants have been dominant throughout 2022, quickly taking the place of previous Alpha and Delta variants. Today, it is essentially the Omicron BA.5 sub-variant that dominates in Europe and the United States. It is to better respond to these mutations that pharmaceutical groups adapt their vaccines.

A concept that is not new: in the case of vaccination against influenza, for example, quadrivalent vaccines – developed with components from two strains of the influenza A type and two influenza type B viruses – are used.

In the case of Covid, so-called bivalent vaccines are designed for the same purpose: to educate the immune system to recognize several attackers. The American-German tandem Pfizer-BioNTech has thus adapted its first vaccine (Comirnaty) against the Wuhan strain for the arrival of Omicron. Spikevax, the vaccine from American biotech Moderna, has also been adapted in the form of a bivalent vaccine against BA.1, on the same principle as that of Pfizer.

In addition to Moderna and Pfizer-BioNTech, other bivalent vaccines are in the works. This is particularly the case of a vaccine candidate from the French and British laboratories Sanofi and GSK targeting the Delta and Beta strains.

The pandemic has officially killed at least 6,526,150 people worldwide since the end of December 2019.

The WHO estimates, taking into account the excess mortality directly and indirectly linked to Covid-19, that the toll of the pandemic could be two to three times higher than that officially established.

Human rights: a seminar highlights the close collaboration between the CNDH and the DGSN

Local authorities: an overall surplus of 7.4 billion dirhams at the end of August