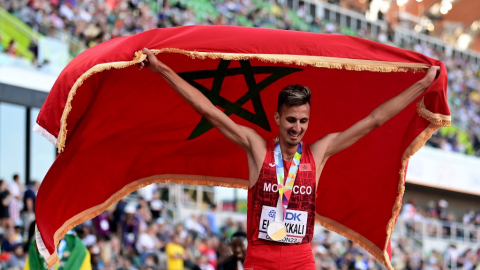 This program is part of the support strategy of the Royal Moroccan Federations for the preparation of Moroccan athletes for the Olympic Games and aims to improve the conditions of preparation of athletes who are part of the Moroccan sports elite in order to provide for their specific sporting needs, indicates a press release from the CNOM.

These scholarships come in addition to the efforts made by the Royal Moroccan Federations to support these athletes, as well as the management of their sports project through the agreements concluded between the CNOM and the Federations, the statement said.

They are financed by Olympic Solidarity (IOC), the Association of National Olympic Committees of Africa (ANOCA), in part, and mainly thanks to the CNOM and the department in charge of sports, through the agreement relating to the implementation of the multi-year program for the preparation and participation of athletes in international sporting events 2019-2028, signed in April 2019, it is emphasized.

The CNOM would like to point out, at the same time, that this scholarship program replaces the qualification bonuses for the Olympic Games, knowing that performance bonuses are also planned.

According to the same source, the Royal Moroccan Federations whose sports are on the program of the Olympic Games-2024 (senior individual Olympic events/categories) can submit to the CNOM the files of Moroccan athletes who meet at least one of the conditions set.

Thus, concerning the elite A, the candidate for the monthly scholarship which amounts to 10,000 DH, must be an Olympic medalist at Tokyo 2020, be ranked in the world top 10 in the last ranking published by the international federation or be a medalist in the last World Championship.

As for the elite C (3500 DH per month), the candidate must be ranked between the 21 and 30 best in the world at the last ranking published by the international federation, be the vice-champion of Africa for the current season , be the 2nd best African sportsman in the latest ranking published by the international federation or be a silver or bronze medalist at the 2022 Mediterranean Games in Oran or at the Islamic Solidarity Games in Konya 2022.

KFC Morocco launches "Dynamite Burger", a new menu based on a 100% Moroccan sandwich