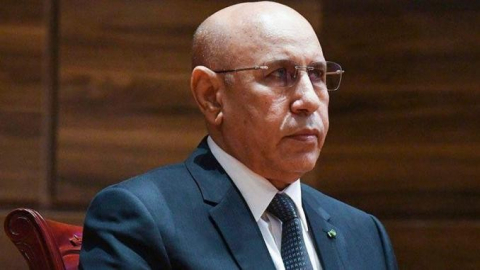 #Morocco : Mauritanian President Mohamed Cheikh el Ghazouani is on a three-day visit to Algeria. On the menu, the strengthening of relations between the two countries, but this visit will also, and above all, be an opportunity for him to try to renew his mediation offer between Morocco and Algeria.

“At the invitation of the President of the Republic, Mr. Abdelmadjid Tebboune, the President of the Islamic Republic of Mauritania, brother country, Mohamed Cheikh El Ghazouani, is paying a three-day state visit to Algeria, from December 27 to 29, 2021” , underlines a press release from the Algerian presidency. “The visit comes within the framework of the strengthening of bilateral relations and the strengthening of cooperation in the best interests of the two brotherly countries”, adds the same source.

However, this bilateral visit, at first glance, will certainly be an opportunity for the Mauritanian president to renew his offer of mediation in the diplomatic crisis between Algiers and Rabat.

Because it should be remembered, Mohamed Cheikh El Ghazouani, ardent defender of Maghrebian integration, applied very early to serve as a conciliator between his two neighbors to the North.

In an interview with the Lebanese magazine Al Iqtissad wal Aamal, he returned to this visit to Algeria and to Mauritania’s desire to play its part to help smooth out the dispute between Morocco and Algeria.

“It is unimaginable the magnitude of the cost that the peoples of the region are paying because of the failure of a strong, efficient and integrated Maghreb union. We are aware of the difficulties encountered by this dream and we regret the obstacles which stand in its way “, suggested the Mauritanian president, before adding:” Mauritania is always ready to play a major role in the restoration of cohesion between the Maghreb countries ”.

And during this visit, he will focus on Mauritania’s delicate balancing act on the Sahara issue. In addition to Nouakchott’s “active neutrality” on this issue which weighs on relations between Morocco and Algeria, President El Ghazouani has assets in bringing the points of view of the two countries closer together.

It benefits from the capital of sympathy on the part of the Moroccan and Algerian leaders. He will also be able to count on the fact that the two countries compete hard to consolidate their relations with Mauritania. And as such, the geographical and strategic position of Mauritania, as a link between North Africa and ECOWAS, means that it has strengths to influence the region. This is all the more true as Algiers, which has long abandoned the continent, is increasingly interested in the African market as part of its policy of economic diversification. And Mauritania is for her a unique gateway to this market.

>>> READ ALSO: Mauritania-Algeria: after Rabat, the head of Mauritanian diplomacy in Algiers

Note, however, that this is not the first Mauritanian attempt on this issue. Just after the breakdown of diplomatic relations between the two countries, the Mauritanian Minister of Foreign Affairs, Ismail ould Cheikh Ahmed, had, on August 30, telephone conversations with the heads of diplomacy of the two countries, Nasser Bourita of Morocco and Ramtane. Lamamra from Algeria.

It remains to be seen whether the will of the Mauritanian president will make it possible to influence the position of his Algerian counterpart. It’s not sure. Abdelmadjid Tebboune and the generals around him do not seem disposed to a rapid return to normal relations between the two countries. In addition, Algeria has refused mediation attempts by many countries, especially those in the Gulf.

If the chances of success of the Mauritanian mediation are slim, the consequences of this three-day visit by the Mauritanian president will be closely scrutinized. Indeed, since the breakdown of diplomatic relations between Algiers and Rabat, on the initiative of the Algerian authorities, the Algerian leaders are increasing regional initiatives with the aim of isolating Morocco. Like the visits of Kaïs Saied to Algeria, then of Abdelmadjid Tebboune to Tunis, and the announcement of “the creation of a new inclusive regional space” by these two heads of state, whose outlines are far from being defined. Is this new entity called upon to replace the Arab Maghreb Union (AMU), and with which member countries?

One thing is certain, however. As for Mauritania, any policy aimed at isolating Morocco at regional level is from the outset doomed to failure. Relations between Mauritania and Morocco are indeed in good shape and the Kingdom has become very strategic for everything related to the supply of Mauritania in various products. Mauritania is also the strategic passage for Moroccan truckers who supply West Africa for many products, in particular vegetables and fruits. And multidimensional relations between the two countries have strengthened in all areas since the coming to power of Mohamed Cheikh el Ghazouani.

>>> READ ALSO: Algeria-Mauritania: the new “border post” of Tindouf far from being able to compete with Guergarate

This visit comes one month before the African Union summit in Addis Ababa with many challenges in the region. In addition to the designation of the representatives of the Maghreb to the Peace and Security Council of the African Union, Morocco and Tunisia having positioned themselves to occupy the post, the granting of observer status to Israel within the Pan-African organization, divides within the region. In the minority on this issue within the AU, Algeria relies heavily on the support of Tunis and Nouakchott.

In short, the shadow of Morocco will hover over this three-day trip by the Mauritanian president to Algeria …

The English Premier League announces the discovery of 103 new cases