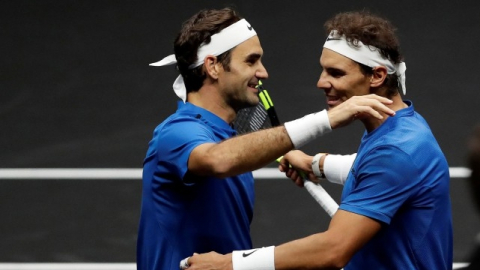 Rafael Nadal said Thursday that the announcement of the retirement of Roger Federer, his historic rival on the tennis planet, was “a sad day for (him) and for sport around the world”.

“It has been a pleasure but also an honor and a privilege to share all these years with you, to live so many fantastic moments on and off the courts,” added the Spanish champion on Twitter.

Federer, and his 20 Grand Slam titles, and Nadal, who took the record to 23 titles, have long inhabited the heights of world tennis alone – until the emergence of the Serbian Novak Djokovic -, facing each other 40 times. (24 victories for the Spaniard against 16 for the Swiss).

Their opposition of style has made their rivalry a legend, coupled with a friendship that has never wavered.

“I wish that day never happened,” writes Nadal, 36, in his reaction to the announcement of the retirement of Federer, five years his senior.

“We will still have many other moments to share together in the future, there are still so many things to do together, we know that”, continues the current world N.3.

“In the immediate future, I truly wish you all the happiness possible with your wife, Mirka, your children, your family,” he adds.

“I’ll see you in London,” he concludes, mentioning the Laver Cup, a competition scheduled for September 23 to 25 in the British capital and which will be the Swiss prodigy’s final competition.