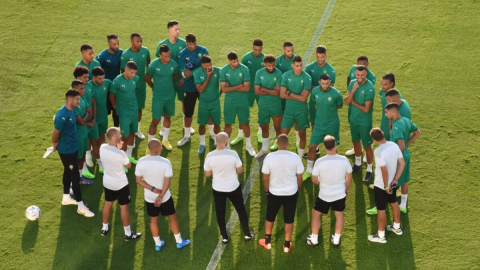 The national football team, currently training at the Mohammed VI Complex in Maâmora, will face Madagascar this Wednesday, September 21 before flying to Spain.

National coach Walid Regragui has scheduled a friendly match for Wednesday against Madagascar before flying to Spain for two friendlies against Chile and Paraguay.

According to sources close to the Royal Moroccan Football Federation (FRMF), the officials of the national body seized the opportunity of the presence in Morocco of the Madagascar national team to schedule this meeting.

Regragui will have to line up in particular the players who will not be established during the Morocco-Chile match scheduled for September 23 in Barcelona, ​​​​we learn from an informed source.

The players and accompanying staff will fly to Barcelona after the match on a special plane chartered by the FRMF.

The Atlas Lions are complete at the Mohammed VI Complex in Maâmora, where they trained yesterday, Tuesday September 20, except for the injured players.

Videos. In the West Bank, scenes of urban guerrilla warfare between Palestinians , H24info