It’s a fact: The water consumption of avocado, watermelon and red fruits is significantly lower than that of conventional crops. Investments in water saving make it possible to recover 2 billion m3 per year.

Several voices have been raised against the planting of “high water-consuming” crops in recent years, with the succession of several years with a rainfall deficit and the difficulty of replenishing groundwater reserves. Avocado, watermelon and red fruits are the first accused. Probably an aberration, if we compare the water needs of these crops to other, let’s say, more classic ones such as potatoes, citrus fruits or date palms.
To give a general illustration, the average annual water requirements of one hectare of crop generally range from 3,000 to 12,000 m3 and depend mainly on the season of the crop and its cycle length. At the level of favorable bour zones, cereals and winter market gardening consume between
3,000 and 4,000 m3/ha. These water requirements can reach 10,000 to 12,000 m3/ha for certain species of arboriculture and perennial crops (avocado, alfalfa, sugar cane, etc.).
To begin with, you should know that planting an avocado tree is not carried out blindly. It is subject to technical criteria and certain climatic conditions, in particular the availability of water, since it requires a regular supply of water during the stages of germination and development. The cultivation of this fruit is carried out up to 98% by drop-by-drop. The same goes for red fruits (strawberries, raspberries and blueberries) and watermelon, mainly in the Zagora and Tata region.

Comparison of needs
The Ministry of Agriculture informs us that the average annual water needs of one hectare of cultivation are estimated at 8,000 m3 for avocado, 3,800 to 4,300 m3 for watermelon (early and seasonal production) and 12 000 m3 for red fruits. When we draw a parallel with estimated needs of between 9,000 m3 and 12,000 m3 for citrus fruits, 4,000 m3 for potatoes and 15,000 to 20,000 m3 for date palms depending on salinity and type of soil, we can realize that these crops are “wrongly” accused of being water-intensive. This, knowing that the irrigated areas intended for the first crops are significantly lower than the second. If we only take the avocado tree, its overall area represents barely 2.5% of the irrigated area, ie 9,300 ha, compared to 8,000 ha for red fruits and 19,200 ha for watermelon. Let’s do the exercise of comparing the overall water requirement of avocado trees and citrus fruits, for example. With an overall area of ​​almost 9,300 ha for the first and around 130,000 ha for the second (almost 90% irrigated), all types combined, consumption then rises to more than 73 million m3 and 1170 million m3 (with an average of 10,000 m3/ha), respectively. It should also be noted that the water sucked in is not totally consumed by the crop. “Several liters of water are evaporated during transport, others are simply wasted, while a good part is sucked up by the plant and feeds the groundwater in different forms: water, residues or even organic matter”, explains an agricultural professor. That on one side. On the other hand, it is to know that each type of crop has an average cycle time to produce. If the avocado tree requires 4 to 5 years to bear fruit, this is not the case for watermelon, whose cycle is less than 4 months, or red fruits which also require a few months.

Misperception
This means that they are not very water-intensive, at least not as the average consumer perceives it. Moreover, the ministry ensures that the choice of crops by farmers is thus essentially dictated by considerations related to the water supply, physical constraints (soil, climate, etc.), 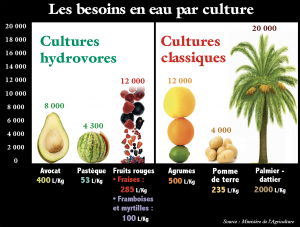 accessibility to the market, to contracts with agro-industrial units… Especially since, to consider this question of crop water consumption, it is important to specify two notions. The first is related to the volume of water needed to compensate for the deficit between evapotranspiration and effective rainfall during the crop growth period. The second refers to virtual water and the water footprint, which makes it possible to estimate the volume of water used for the production of consumed food products. Considering this point, fruits and vegetables are among the good students, since they require less than 300 liters to produce 1 kg of product consumed. On the other hand, cereals consume 3 to 4 times more per Kg. given the level of their exports and the social stability in the rural world that they provide.
The fact remains that Morocco, taking the question of the scarcity of water availability head-on, has taken several measures to extend the areas under irrigation and the generalization of economical irrigation techniques. in water. “Today almost all high value-added crops are irrigated by drop-by-drop,” says the ministry. In addition, the areas equipped with water-saving irrigation techniques have increased from 160,000 ha to more than 700,000 ha currently. Similarly, the comprehensive modernization of collective irrigation networks has been completed or is under construction on nearly 160,000 ha, and the extension of irrigation to new land is completed or under construction on 82,000 ha. These efforts have led to advances in the conservation of water resources, increased agricultural productivity and farmers’ incomes. Moreover, “we estimate that the investments made make it possible to save and develop nearly 2 billion m3 per year”, adds the ministry. Other progress has been recorded with irrigation water savings of 30 to 40%, a clear improvement in crop yields of 40% on average, a doubling of water valorization, as well as a clear appreciation of the added value per hectare (multiplied by 2 to 5 times).

You can read more on our pdf edition, available for free