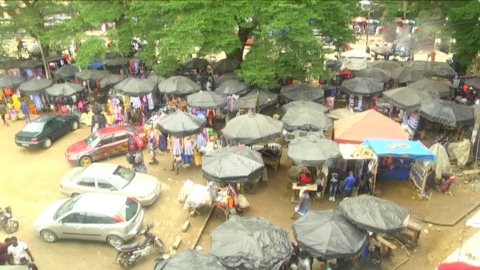 #Ivory Coast : It is not rare to see in Abidjan vendors occupying the streets anarchically and illegally. These traders conduct their business peacefully to the detriment of the tranquility of local residents. It is almost the 12 communes of Abidjan as a whole that are affected by this situation.

In Abidjan, the Ivorian economic capital, several streets are increasingly being transformed into illegal markets. In almost all municipalities, this phenomenon is gaining momentum. Here, in Yopougon Siporex, the surrounding streets of this district are occupied by hundreds of vendors. To top it off, the green space of this city built in the 1970s has become an open-air market for 20 years. Here, the sale of various items often rhymes with fights, thefts, deafening noises and many other inconveniences. And all this, to the detriment of local residents, helpless in the face of this situation.

“You can be attacked easily and you cannot go home after 6 p.m. or 7 p.m. because the vendors’ umbrellas and table-benches are placed in such a way that whoever attacks you is safer than you go home home», deplores Arnaud, the president of the young people of the Siporex city.

>>> READ ALSO: Ivory Coast: reading, writing, calculating and counting, a challenge to be met in the markets

“Here, it is not a market. We grew up here and at the base, it was an open air and as a child, we played there and today people have settled. You want to go home, there are people and we don’t know who is who. Insecurity is what bothers us. The town hall must look into the case of anarchic installations», adds Alice Natacha, a local resident.

According to the inhabitants of the area, it was during a trade fair in 1992 that this green space was temporarily occupied by traders for the occasion. Since then, the site has been illegally and anarchically transformed into a market. Cleared out several times, the sellers have, each time, colonized the place again. Under umbrellas, tarpaulins, they offer customers various services ranging from catering to second-hand clothes, including the sale of shoes and telephones.

“I do my small business here, I sell sauce with rice, attiéké and fish. it won’t be easy for people to leave here, because there is no place where you can go to sell», supports Noëlle Sedji, a restaurant owner.

“We are not the force. They are there, they are selling. We can’t do anything, so it’s difficult. Do you see me forcibly telling them to leave? I can’t», resigns Mariam Diaby, a local resident.

The municipal authorities of Yopougon, for their part, are in the process of building more modern markets, two of which are now functional. The cost of all these markets under construction amounts to 1.10 billion CFA francs (1.676 million euros). Objective: to put an end to these illegal and anarchic markets and relocate a large number of traders to modern sites. Despite this, for some, more space is needed in the markets to meet demand.

>>> READ ALSO: Gabon: in the atmosphere of the spontaneous night markets in Libreville

“We are still working on this problem and there are not enough places according to the merchants, because as you know, in commerce, every day there is a new person who sets up with his table, so , we will say that the 600 places are not a lot, because there are maybe 5,000 traders», says Arnaud, president of the young people of the Siporex city.

As a reminder, according to the occupants of the illegal and anarchic markets of Abidjan, the municipal authorities of their respective communes regularly levy taxes. A situation that weighs down the fight against these anarchic and illegal markets.

Led by Amota... Wydad Sports Club face the Olympic team in a friendly