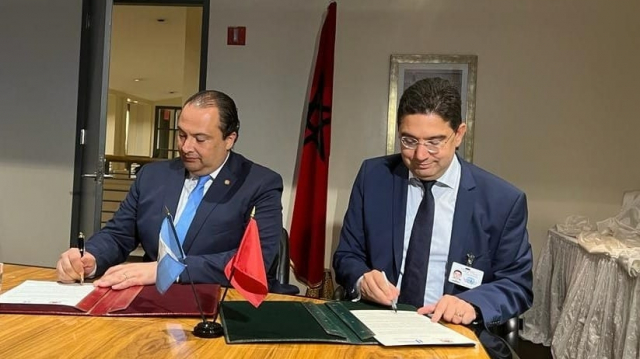 Guatemala decided yesterday, Thursday September 22, 2022, to open a consulate in Dakhla, while reaffirming its support for the autonomy plan under Moroccan sovereignty as the only solution to the regional dispute over the Moroccan Sahara.

“Guatemala has reiterated its clear position on the regional dispute over the Moroccan Sahara, considering that autonomy under Moroccan sovereignty is the solution to this dispute and announces the decision to open a consulate in the city of Dakhla to take advantage of its economic potential and its openness to the rest of the African continent”, indicates a joint press release published after a meeting between the Minister of Foreign Affairs, African Cooperation and Moroccans residing abroad, Nasser Bourita, and his Guatemalan counterpart, Mario Bucaro Flores.

“For us, the concepts of sovereignty, peace and territorial integrity are very important. We support Morocco’s position on this issue and we will continue to support Morocco forever”, said the head of diplomacy of Guatemala, in a statement to the press, at the end of this interview held on the sidelines of the General Assembly. United Nations.

Mario Bucaro Flores “highly appreciated the reforms undertaken in Morocco under the leadership of His Majesty King Mohammed VI, as well as its role and contribution to solving the problems of Africa and the Arab world by peaceful means”.

He also highlighted the importance of strengthening the cooperation relations that his country maintains with Morocco.

Nasser Bourita praised, for his part, “the efforts of the Guatemalan government led by His Excellency the President of the Republic, Alejandro Giammattei, in terms of reforms, as well as its role at the regional and international levels in favor of peace”.

The two ministers discussed, on this occasion, the various aspects of bilateral cooperation and exchanged views on regional and international issues, welcoming “the convergence of views on all the issues discussed”.

Morocco and Guatemala have decided to “give impetus to bilateral cooperation in the areas of tourism, training and energy, with particular emphasis on agriculture and fertilizers, at a time when the world faces an acute food crisis,” the joint statement said.

Regragui, Chebbak, the RSB… discover the winners of the first edition

Here is the weather in Morocco this Friday, September 23