Its typical economic model is based exclusively on market indebtedness. Its vocation is to finance the projects of local authorities. But this public bank has the highest rates of return in the sector. To analyse.

It is a rather particular financial institution which should inaugurate issues on the bond market in 2022. It is the Communal Equipment Fund (FEC) which has just obtained the visa of the stock market policeman for a loan of one billion of dirhams, to be launched from the 1er working day of the new year.

“The Fund’s last exit on the bond market was narrowly completed in December 2019,” recalls this financial advisor. “The proposed 2 billion has barely been raised. This is also the reason why the FEC is content today to raise only one billion dirhams, knowing that the liquidity crisis is still being felt on the market ”, continues this interlocutor, who does not bet on a rush of subscriptions. However, the solvency of the FEC signature is real, with regard to its typical economic model …

Placed under the supervision of the Ministry of the Interior, this public establishment is a bank exclusively dedicated to local authorities. “Construction or upgrading of sports, educational or cultural infrastructure, public lighting and urban space planning, rural opening up or areas of economic activity … There is hardly a single structured local development project of which the financial package does not include a loan from the FEC, ”explains a connoisseur of this institution.

One figure speaks volumes about the precious contribution of this organization in these essential projects for improving the living environment of citizens: 18% of investment expenditure by local authorities, over the last five years, is covered by loans mobilized. with the FEC. In 2020 alone, the fund “participated in the financing of 158 projects for the benefit of different categories of local authorities and covering different sectors of infrastructure and superstructures in both urban and rural areas, totaling a volume of loan disbursements from the ‘order of 3,510 million dirhams’, as the information note accompanying this bond issue indicates.

Annus horribilis for the banking sector, 2020 has been an ordinary year for the finances of this specialized credit institution. Its net income has certainly fallen by nearly 16% to 244 million dirhams, but this decline is mainly due to the contribution of 100 million dirhams paid to the Special Fund for the management of the Coronavirus pandemic (Covid -19). By restating them for this exceptional contribution, converted into a tax credit over the next few years, the FEC’s profits would have been up 15% compared to the 270 million in profits generated in 2019.

Better still, the FEC displays disconcerting rates of return compared to the benchmark of the banking sector. When local establishments earned, on average in 2020, 4.8 dirhams out of 100 dirhams of its own funds, this particular bank pocketed 6.26 dirhams. Ditto for the profitability ratio of FEC assets, the level of which is twice as high as the average for banking establishments, which stands at 0.5%.

The secret of this financial performance lies first and foremost in the risk profile of its portfolio. The organic laws relating to regions, provinces and municipalities all guarantee the repayment of loans: loan annuities are in fact compulsory expenses that any local authority must enter automatically in its budget.

“The late payments are exceptional and the situations are quickly rectified”, explains this connoisseur of the file. For example, when the accounts were closed on June 30, 2021, the collection rate stood at 92%, but as of July 15, it rose to 98% following the rapid collection of drafts payable.

Thus, the cost of traditional risk for any traditional bank is almost non-existent for the FEC, since it is never confronted with situations of default on the part of its customers. The rate of bad debts is barely 0.15% for this establishment while the average loss rate for Moroccan banks is 8.2%. 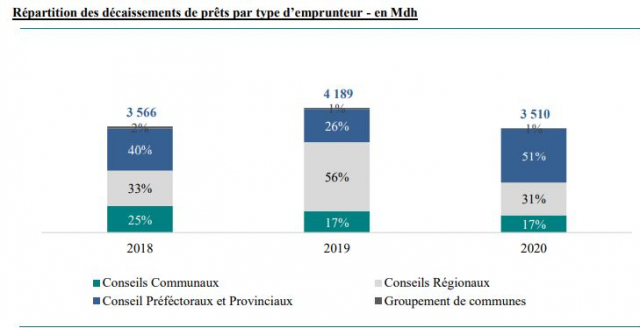 On the other hand, with less than a hundred employees only and investments that do not exceed a handful of millions of dirhams, the FEC displays an operating ratio that is out of step with the average for the banking sector. This does not exceed 59 million dirhams for a net banking income (NBI) of more than 621 million.

This NBI comes mainly from the more than comfortable interest margin of the Fund. A margin that is also cringe some members of municipal councils. “Admittedly, the rates applied by the FEC keep falling from year to year to today oscillate between 4.1% and 4.6%. But the margin applied in relation to the cost of financing this bank remains quite disproportionate if we take into account that it is a financial service paid by and for the citizen. An effort is still to be made on the exit rates knowing that the cost of financing the FEC has been less than 2.5% in recent years, ”explains a member of the regional council.

However, these exit rates are revised annually by the Fund’s governance bodies in which elected officials are widely represented. Eight municipal councilors appointed by decision of the Minister of the Interior sit – alongside eight other members representing the administration – on the Board of Directors of the FEC, chaired by the head of government and headed by a governor of the Ministry of Interior.

Nevertheless, the FEC’s pricing policy deserves to be revisited. Especially since this public establishment – one of the oldest in Morocco, since it was created in 1959 – has come a long way since its exit from the yoke of the Caisse de Dépôt et de Gestion (1992) and the obtaining its banking license in 1997.

Over the past two decades, the outstanding amount of loans distributed by the FEC has increased fivefold. But above all, the fund has succeeded in optimizing its financing costs and recovered its credibility with international organizations. Because if in the 1990s, the fund mobilized a significant part of its resources via external borrowing, it has not benefited from any drawdown abroad since 2003. It was not until 2019 that it resumed with this method of financing by mobilizing a line of credit of 100 million euros from the French Development Agency (AFD).

As recently as March, a loan agreement of $ 165 million was signed with the Japan International Cooperation Agency (JICA). “New financing contracts are being negotiated with other international agencies. Because the FEC has initiated discussions with several donors, some of which have already obtained authorizations from their respective governance bodies, following the due diligence they carried out between 2020 and 2021 ”, confides our source.

This type of financing is generally associated with advantageous conditions in terms of maturity or rate. This would not fail to positively impact the cost of financing the FEC, whose debt portfolio is essentially made up of bond issues. “The proportion of bond debt is set to increase knowing that the year 2022 will be marked by the repayment of 1.5 billion dirhams of certificates of deposit”, explains the same interlocutor.

It therefore remains to be hoped that this optimization of financing will have repercussions on the exit rates applied to local authorities. Especially since the needs of the latter are proportional to their rise in power as major players in territorial development. Urban and interurban transport, liquid and solid sanitation, major equipment… So many structuring capital projects, which require large volumes of financing. A godsend for this exclusive bank …