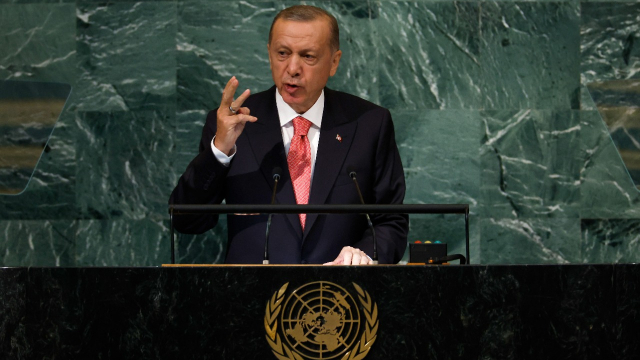 The two leaders met on the sidelines of the UN General Assembly in New York, a month after the reestablishment of diplomatic relations between the two countries.

Yair Lapid “raised the issue of missing or captive Israelis and the importance of bringing them home,” the prime minister’s office said in a statement. Hamas militants are said to be detaining two Israeli nationals.

The Israeli leader also expressed his concerns about arch-enemy Iran and “thanked President Erdogan for his intelligence cooperation,” according to the same source.

After months of diplomatic warming, Israel and Turkey announced on August 17 the full restoration of their bilateral relations and the return of ambassadors to both countries.

Relations between the two countries were strained in 2010 after the deadly assault by Israeli forces on the Turkish ship Mavi Marmara, which was trying to deliver aid to Gaza, a Palestinian enclave under Israeli blockade and controlled by the Islamists of the Hamas.

Recep Tayyip Erdogan’s last meeting with an Israeli prime minister was in 2008.

In his speech at the UN platform, the Turkish president reiterated yesterday, Tuesday, his call for the creation of a Palestinian state with East Jerusalem as its capital.

But he also expressed the wish to “continue to develop our relations with Israel in the interests of the future, of the peace and stability of not only the region but also Israel, the Palestinian people and ours”.

Less than a year before the presidential election scheduled for mid-June 2023, the Turkish president is stepping up initiatives to normalize relations with several regional powers – including Saudi Arabia and the United Arab Emirates – in search of investments. .

More than 600 African migrants deported from Algeria to Niger, H24info