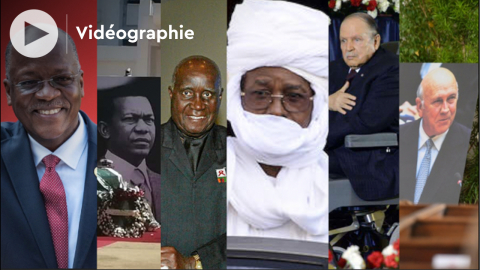 #Other countries : Two sitting presidents and several former heads of state died in 2021, making it one of the deadliest years for the continent’s leaders and ex-leaders. Contrary to what one might think, the pandemic is not the only cause of this massacre.

The list is far from exhaustive knowing that we have also recorded deaths of transitional presidents including Abdelkader Bensalah (Algeria), Abbas Bonfoh (Togo) …

John Magufuli, nicknamed the “Bulldozer”, the former Tanzanian president (2015-2021) died in office on March 17, 2021, at the age of 61, a few months after his re-election for a second term. Known for his skepticism towards Covid-19, the Tanzanian president is said to have died of the virus.

Didier Ratsiraka, ex-president of Madagascar – March 28
Former Madagascan President Didier Ratsiraka died on March 28 in Antananarivo from a flu at the age of 84. Nicknamed “the Red Admiral” because of his career and his ideology, the founder of the Socialist and Nationalist Party Arema led the Big Island twice: 1975-1993 and 1997-2002.

Idriss Déby Itno, President of Chad – April 20
The Marshal of Chad, Idriss Déby Itno, died on April 20, 2021 in N’Djamena
consequences of wounds in combat against the rebels of the Front for alternation and concord. His death, at the age of 68, came just days after his re-election to a 6th term at the head of Chad and after 31 years in power.

Kenneth Kaunda, Former President of Zambia – June 17
Former Zambian President Kenneth Kaunda died on June 17 in Lusaka. Zambia’s father of independence ruled the country from October 1964 until November 1991 when it was defeated in the presidential election to Frederick Chiluba.