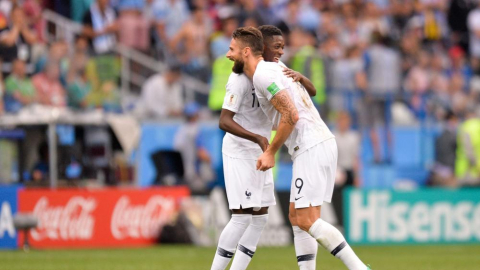 Forwards Olivier Giroud, Ousmane Dembélé and Randal Kolo Muani were called up to the France team on Thursday by coach Didier Deschamps for the last stage before the 2022 World Cup (November 20-December 18 in Qatar), while Karim Benzema, injured, is not in the list.

The Blues face Austria and Denmark on September 22 and 25 in the League of Nations.

The package of Benzema, indisputable holder in the selection and touched in the right thigh, does the business of Giroud, who connects the good performances at AC Milan.

The world champion, monument to 112 selections and 48 goals, had already replaced Benzema at short notice in March with success (two goals) and has not lost hope of playing in the World Cup, at 36 years old. Deschamps had however found it difficult to see the two competitors associated with the Blues, the experience of Giroud preventing him from being confined to a role of lining, according to the coach.

Frankfurt striker and ex-Nantais Randal Kolo Muani is called up for the first time in his career in blue in place of Monegasque Wissam Ben Yedder.

If the other attacking stars, Kylian Mbappé and Antoine Griezmann, are present, Kingsley Coman, victim of a muscle tear in the right thigh on Friday in training and away from the field between two and four weeks, is logically absent.

This allows Ousmane Dembélé (27 selections) to find the Blues, a first for the FC Barcelona dribbler since June 2021 and his exit through injury against Hungary in the 1st round of the Euro. He is taking advantage of his remarkable performances in Catalonia, where he stayed this summer after a turbulent showdown.

In midfield, Deschamps is orphaned by his two executives Paul Pogba, operated on his right knee in early September and engaged in a race against time for the World Cup, and N’Golo Kanté, in the recovery phase after a new injury in August.

These two unavailability open the door to the Monegasque Youssouf Fofana, summoned for the first time alongside Aurélien Tchouaméni, Adrien Rabiot, Matteo Guendouzi and Eduardo Cavaminga.

"The Olympique de Safi will not abdicate", says its president