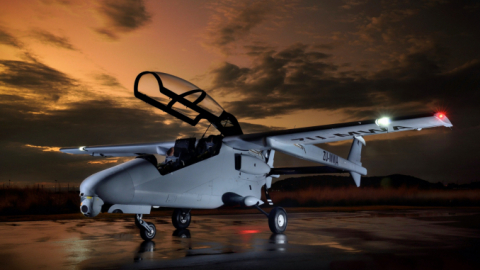 #Other countries : South African group Paramount Aerospace Industries said on Wednesday it had received orders for nine of its Mwari planes. It is the first military aircraft designed and built in the country for nearly two decades.

South Africa is repositioning itself as an arms power in Africa. Paramount Aerospace Industries said on Wednesday it had received orders for nine of its Mwari planes. It is the first military aircraft designed and built in the country for almost two decades, when production of the Rooivalk attack helicopter, developed by the public defense company Denel, ended in the early 2000s.

Thus, business resumed and South Africa wanted its place on the arms market. And the Mwari, a propeller-driven reconnaissance, surveillance and precision strike aircraft, carries this ambition. The first of the 9 aircraft ordered from Paramount will be delivered this week, the group announced on the sidelines of the Africa Aerospace and Defense exhibition, which is being held from September 21 to 25 in Pretoria.

Declining to name its first two customers, Paramount nevertheless pointed out that it was targeting military customers in African and Asian countries for its sales. “We have immense interest around the world,” said its founder, Ivor Ichikowitz, quoted by Reutersstating that “our biggest challenge at the moment is going to be to set up production capacity quickly enough to meet demand”.

The Mwari, whose development was launched in 2010, is presented as a relatively inexpensive alternative to expensive and high-maintenance military aircraft used for surveillance, maritime patrol and counter-insurgency operations. Its base price is $10 million, but additional options exist, such as high-tech optical pods, electronic intelligence gathering, and night vision.

MRE, patriots against all odds!

Video-Slide. The first images of the Atlas Lions in Barcelona