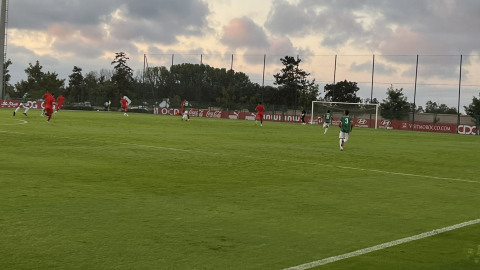 The national team played a one hour opposition (2 x 30 minutes) against the Malagasy selection, this Wednesday at the Mohammed VI football complex. The Lions won with a goal from Walid Cheddira.

For their third day of gathering, the national team played a one-hour (2 x 30 minutes) opposition against the Madagascar national team at the Mohammed VI football complex.

Walid Regargui’s players won this training match with a score of one goal to nil. The goal for the Lions was the work of the striker from Bari (Serie B),
Walid Cheddira.

The Atlas Lions will fly tomorrow, Thursday, to Spain where they will play two friendlies against Chile on September 23 in Barcelona and against Paraguay four days later in Seville.

The Atlas Lions are complete at the Mohammed VI Complex in Maâmora, where they trained yesterday, Tuesday September 20, with the exception of injured players.

MAS de Fès: An envelope of 5.6 MDH for the creation of a training academy

in the face of inflation, the Fed counterattacks with a new rate hike , H24info