Aziz Akhannouch’s strong messages to the UN about the Sahara

“On the ground, the southern provinces are living to the rhythm of an irreversible development dynamic, within the framework of the new development model launched by HM King Mohammed VI in 2015”.

The Kingdom resolutely committed to a definitive political solution within the framework of the autonomy plan and its national sovereignty. This is the clear, clear and unequivocal message sent by Morocco to the 77th General Assembly of the UN. In this context, the head of government, Aziz Akhannouch, reaffirmed, on Tuesday in New York, Morocco’s commitment to reach a definitive political solution to the artificial regional dispute over the Sahara, on the basis of the Moroccan Initiative for autonomy and within the framework of the national sovereignty and territorial integrity of the Kingdom.
“The Kingdom of Morocco reiterates its commitment to reach a definitive political settlement to the artificial regional conflict around the Moroccan Sahara, based on the Moroccan Autonomy Initiative, the only and unique solution to this dispute, and this within the framework of the territorial integrity and the national sovereignty of the Kingdom”, underlined Mr. Akhannouch in the declaration on behalf of Morocco at the 77th General Assembly of the United Nations.
The Head of Government recalled that this “serious and realistic” initiative has enjoyed, since its presentation in 2007, the support of the Security Council and more than 90 countries.

“On the ground, the southern provinces are living to the rhythm of an irreversible development dynamic, within the framework of the new development model launched by HM King Mohammed VI in 2015”, Mr. Akhannouch also underlined, indicating that the populations of the region participate fully in all stages of the implementation of this ambitious model, through their democratically elected representatives in the Councils of the two regions of the Moroccan Sahara. He also pointed out that the active participation of the populations of the Moroccan Sahara in all aspects of political, economic, social and cultural life testifies to their attachment to the territorial integrity of Morocco and to the Moroccanness of the Sahara. The Head of Government also reiterated Morocco’s full support, as underlined in the speech by HM King Mohammed VI on the occasion of the 46th anniversary of the Green March, to the efforts of the UN Secretary General and his personal envoy to relaunch the process of round tables in the same format and with the same participants, with a view to achieving a realistic and lasting political solution, based on compromise, in accordance with Security Council resolutions, in particular 2602.
Role of Algeria

“Algeria’s participation, seriously and in good faith, in the round table process, in the same way as its proven responsibility in the creation and maintenance of this artificial dispute, is a sine qua non condition for reaching a definitive settlement. to this question,” said Mr. Akhannouch.
Morocco once again expressed its deep concern about the catastrophic humanitarian situation and the state of lawlessness experienced by the populations of the Tindouf camps, declared the head of government, stressing that Algeria, in flagrant violation of international humanitarian law, ceded its powers over this part of its territory to armed separatist militias with proven and confirmed links with dangerous terrorist networks in the Sahel region.

Call for the census

Mr. Akhannouch, in this context, reiterated Morocco’s appeal to the international community to encourage Algeria to respond to the calls of the Security Council launched since 2011, to allow the Office of the United Nations High Commissioner for the refugees to carry out the census and registration of the sequestered population in the Tindouf camps.

Furthermore, Morocco will continue to show firmness in its efforts to fight human trafficking networks. Mr. Akhannouch said that these networks represent a “serious threat” to the sovereignty and stability of countries, as well as to the security of people.
He noted that Morocco will continue to strengthen the dynamics of global, united and human management of the migration issue within the framework of the national immigration and asylum strategy, launched by HM King Mohammed VI in 2013.
Noting the direct impact of global security crises on migratory movements around the world, the Head of Government affirmed that in line with the insightful vision of HM the King, Morocco remains committed to the foundations of the Global Compact for Safe Migration, orderly and regular adopted in Marrakech in December 2018. 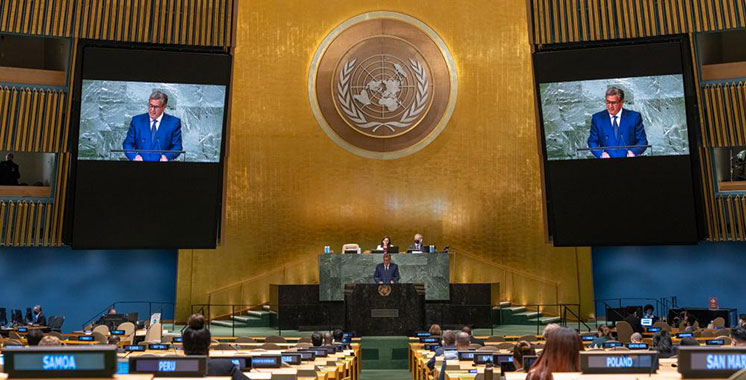 Referring to peacekeeping operations, which remain “one of the important achievements” of the international organization and reflect its ability to unite capabilities, Mr. Akhannouch insisted on the need to work towards their development and immunization to ensure the safety of those deployed there.
Mr. Akhannouch recalled, in this context, that HM King Mohammed VI gave His High Instructions, on the occasion of the 66th anniversary of the creation of the Royal Armed Forces, for the establishment of a multidisciplinary Moroccan maintenance center of peace, with the mission of training and supporting national and foreign skills, particularly on the African continent, in partnership with the United Nations and certain friendly countries, in order to promote the principles of international security and peace .

In another register, the head of government reaffirmed Morocco’s conviction that multilateralism must be based on collective interaction and compromise, at a time when the world is living to the rhythm of multifaceted crises with interconnected repercussions.
“The Kingdom of Morocco reaffirms its conviction that multilateralism is based primarily on collective interaction and renewed approaches to compromise, as underlined by HM King Mohammed VI, may God assist him, in His speech before the 59th session of the General Assembly of the United Nations”, indicated Mr. Akhannouch in the declaration on behalf of Morocco before the 77th session of the General Assembly.
“Morocco strongly reaffirms its constant commitment to continue to work, together with you, for a concrete renewal of multilateralism, based on international legality, solidarity and equity in economic and social relations, and, relying on the efficiency and dynamism of the UN system in the accomplishment of its mission”, HM the King had indicated.

The Head of Government felt that the current situation requires “courage and objectivity” to answer the following fundamental questions: to what extent do we want our Organization to be able to carry out strategic changes to meet the major challenges of our time or rather settle for crisis management? What if our Organization is still capable of generating international consensus and arriving at innovative solutions to current and future challenges?
“We affirm here that it is not objective anyone who thinks that their own means are sufficient, on their own, to contain these challenges. Multilateral action has never been a luxury, and the global crises we are experiencing today are proof of this, and show that the security and prosperity of some are dependent on the stability and progress of others”, indicated Mr. Akhannouch.
Faced with the current challenges, two options are necessary, according to him, either to ignore the crises that the world is facing collectively or to intensify efforts to deal with them effectively.

After recalling that the world is confronted, three years after the outbreak of the Covid-19 pandemic, with a multitude of inextricable challenges and successive crises, Mr. Akhannouch indicated that “what hinders the relevant management of these crises is not our inability to identify its aspects and interactions, but rather the absence of a real and active political will”.

“The Multilateral System is today going through a structural crisis which is broken down into three interlocking levels”, he added, referring to a crisis of values ​​with the regression of the principle of cooperation and solidarity on which the United Nations was founded. ; the divisions that undermine international institutions; as well as the fragmentation of multilateral action into close alliances of convenience that do not fit with the complex nature of the crises of today’s world.

Cubs put to the test against Australia

Province of Chefchaouen: Baraka launches the extension works of the port of Jebha

what the signing of the agreement with ECOWAS has changed