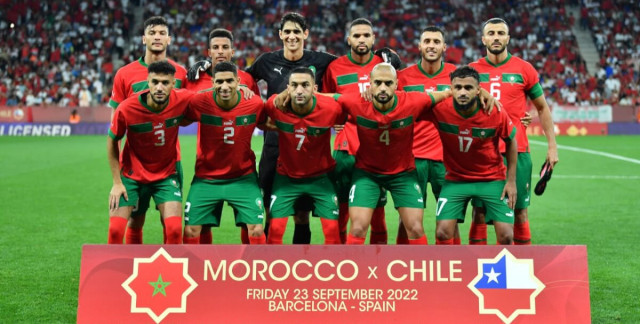 This Friday, September 23, 2022, the Hakimi, Ziyech and other Boufal offered Walid Regragui his first victory at the head of the Atlas Lions against Chile (2-0). Throwback to the performance of the Atlas Lions. Player by player, without forgetting the coach.

Yassine Bounou: 6
There’s not much to blame the Sevilla goalkeeper for. If he was not really decisive, he was still able to be relatively reassuring, on one or two hot actions.
The thing deserves to be mentioned, as his performance since the start of the season left something to be desired.

Ashraf Hakimi: 7
For once, the PSG defender played it a bit old-school. He blocked his lane more than he brought offensive reinforcements. The few duplications with Hakim Ziyech almost hit the mark.

Ashraf Dari: 5
Well, we can blame him for his offside position which deprives Hakimi of the opener, some imprecise reminders and a technical background that would fit in a toiletry bag. But his sincere commitment, sometimes excessive, and his sense of sacrifice were still assets.

Roman Saiss: 6
We thought he was a little worn, too slow for younger teammates. He showed that it was not. And that he remained the real boss of the Atlas Lions. Business as usual…

Noussair Mazraoui: 6
A simple backup substitute in the left-back position, Mazraoui the right-hander, against all odds, delivered a good copy. In a job that is not his, the Bavarian has indeed done well, effectively taking care of the case of Alexis Sanchez who still remains a serious client.

Sofyan Amrabat: 6.5
Not only did he play his role as first defensive bulwark almost perfectly, but he quite naturally took on the responsibility of organizing the back lines and he even distinguished himself in the recovery. Amrabat is here for a long time, we are ready to bet our Italian shirt on that!

Selim Ammalh: 4
The midfielder of Standard de Liège showed unfailing enthusiasm and fighting spirit. Still, we expected much more, especially in terms of offensive animation. Commitment is good. You still have to manage to recover the ball higher, keep it and, above all, know what to do with it. During the match, and with the exception of the action which brought back the penalty, Amallah seems to have run quite a few kilometers behind the answer…

Azzedine Ounahi: 6
Another Moroccan satisfaction, which seems more and more promising. A little shy at the start of the game, the product of the Mohammed VI Academy picked up speed over the minutes to finally take the measure of his vis-à-vis.

Sofiane Boufal : 8
Having become the darling of the Moroccan public after an excellent AFCON, the player from Angers once again gave him what he was asking for. Accelerations, nice technical gestures and a slew of dangerous crosses towards the surface (Ah if Tarik Tissoudali was not injured!). Replaced in the 75th by Abdelhamid Sabiri, who only needed a first ball to open his counter-goal with the Lions.

Hakim Ziyesh: 7
Dull, lacking competition? Let’s go! In Barcelona, ​​he was the Ziyech of the big nights, hyperactive and hyper-helpful for his teammates. He did a monstrous job of undermining the Chilean defense. He also made a huge effort defensively. With Hakim, the right lane of the Lions is in good hands. Come on, more in-game presence to win, and he will become the star he already thinks he is.

Youssef En-Nesyri: 3
Apart from a few races and one or two failed checks, the striker with the hairstyle (but without the size) of an eighties boxer has not done much. In fact if, it will be at the origin of a new controversy Hamdallah.

The other substitutes (Aboukhlal, Ezzalzouli, Harit, Cheddira, Jabrane) only tested the Barcelona turf. And rating it for a few meters of running would be unfair.

Walid Regragui: 9
It was Regragui’s first outing in an official match at the head of the Atlas Lions. Verdict of the first life-size test: success at Walid, Siir!

the notes of Coach Walid and his Lions