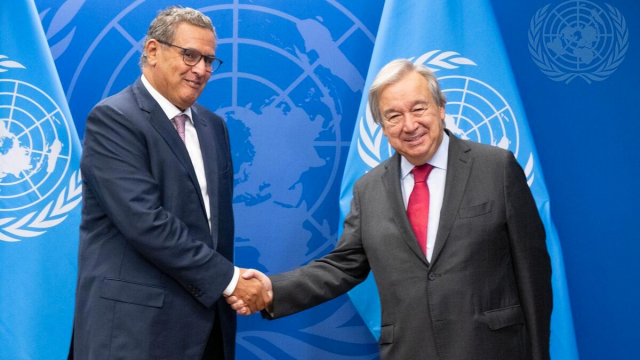 The head of government, Aziz Akhannouch, was received on Thursday, September 22, 2022 in New York, by the UN Secretary General, Antonio Guterres.

The Head of Government, Aziz Akhannouch, accompanied by Nasser Bourita, Minister of Foreign Affairs and Omar Hilale, Ambassador, Permanent Representative of Morocco to the UN, was received on Thursday September 22, 2022 at UN headquarters by United Nations Secretary General Antonio Guterres.

During this meeting, the UN Secretary General instructed the Head of Government to convey his warm greetings and great esteem to His Majesty King Mohammed VI.

Antonio Guterres expressed his high appreciation of the important role played by Morocco on the various issues on the United Nations agenda, reiterating his gratitude to the Kingdom for its active support for the initiatives and proposals of the Secretary-General with a view to revitalizing the Organization and face global challenges.

Antonio Guterres thanked the Kingdom for its cooperation with its personal envoy for the Moroccan Sahara and MINURSO.

The UN Secretary-General also expressed his gratitude to the Kingdom for the invaluable contribution of the Royal Armed Forces to United Nations peacekeeping operations.

He also congratulated Morocco for its constructive role in the Libyan file, as well as its initiatives for interreligious and intercultural dialogue.

For his part, the Head of Government conveyed to Antonio Guterres the cordial greetings and expressions of esteem of the Sovereign towards him.

The Head of Government reaffirmed Morocco’s commitment to support the efforts of the Secretary General and his personal envoy aimed at reviving the political process in accordance with resolution 2602, and in accordance with the Kingdom’s constant position on the national question.

He welcomed the close cooperation and commitment of the Kingdom to continue its support for the action of the United Nations under the leadership of Antonio Guterres. He also hailed his courage in facing current global challenges and his determination to work for the establishment of a more equitable world order, towards developing countries, particularly in Africa, which are seriously impacted by the energy and food crisis.

Aziz Akhannouch also highlighted the multiple actions and major projects carried out by the Kingdom, in accordance with the high royal instructions, and which converge with the priorities of the UN Secretary General.

The Head of Government chairs the Moroccan delegation to the 77e session of the United Nations General Assembly on the instructions of His Majesty King Mohammed VI.

Tourism: how much did holidays in Morocco cost this summer?