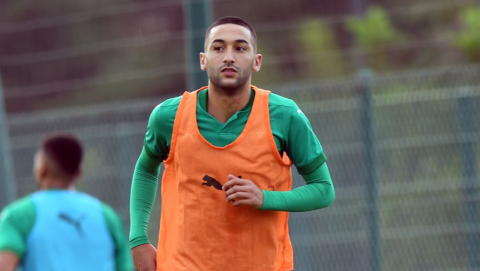 During a training camp at the Mohammed VI Football Complex in Maâmora, Abdessamad Ezzalzouli and Hakim Ziyech spoke about the friendly matches scheduled in Spain. The two Moroccan internationals did not hide their joy at finding the national team, under the direction of a new technical staff. Here are their words.

In statements to the website of the Royal Moroccan Football Federation (FRMF), Abdessamad Ezzalzouli and Hakim Ziyech expressed their feelings of finding their teammates in the national team.

Present at the preparation camp at the Mohammed VI Football Complex in Maâmora, in anticipation of the friendly matches against Chile and Paraguay, on September 23 and 27, in Spain, the two Atlas Lions said they were particularly happy to evolve under the direction of a new staff.

Abdessamad Ezzalzouli: “I am happy to be back with the national team and my teammates. We will prepare, as you know, for the World Cup, with two friendlies against Chile and Paraguay. The World Cup draw put us in a tough group alongside Croatia, Canada and Belgium. But the national team has good elements, and I believe that we will achieve good results.

Hakim Ziyesh: “These are very important matches for us since they will be the last before the World Cup. It will be an opportunity to assess our level, especially with a new coach, new staff and new ideas. I am happy to be back with the national team after several difficulties. And now I’m ready.”

Social security in Spain: Moroccans at the top of the table