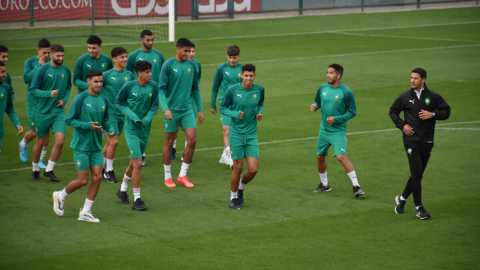 The national under-23 team, under the leadership of Houcine Ammouta, will face, this Thursday, September 23 in Rabat, its Senegalese counterpart, as part of its preparations for CHAN 2022. Here is what time and on what channel to follow this meet live.

In preparation for the African Nations Championship scheduled between January 13 and February 4, 2023 in Algeria, the national under-23 team faces, this Thursday at the Moulay Abdellah Complex in Rabat, Senegal.

This meeting will be broadcast live by the third of the SNRT Arryadia group, from 6:30 p.m.

Another friendly match between the two selections is scheduled for September 25, still at the Moulay Abdellah Complex in Rabat.

Highly anticipated matches, insofar as we will have the opportunity to see at work nuggets evolving abroad and of which we say a lot of good.

The players of the national team began, Monday, September 19, an internship at the Mohammed VI Football Complex in Maâmora. This course should continue until the 27th current.

For this gathering, 28 players including several playing abroad have been summoned. The Atlas U23 Lions will play the African Nations Championship scheduled between January 13 and February 4, 2023 in Algeria, replacing the national team of local players which has been dissolved.